You are here: Home / Health / Fitness / 5 fitness video superstars of the 80s who inspired me

My first experience with exercising, other than gym class (which I HATED), was somewhere around age 13 or 14. It was the early 80s. At that time of my life, my main focus with that was losing weight and really not that much about getting fit. And it was very much off-and-on. But still, at least I was getting some exercise during those times, because otherwise I wasn’t all that active.

Here are some of the fitness gurus who inspired me back in the day, and why.

Do you remember Joanie Greggains? She had a syndicated half-hour TV show called “Morning Stretch” that came on every morning at 6:30 a.m. Monday through Friday. The show debuted in 1982 and I started getting up early to do it before school. Joanie made exercise enjoyable with her cheerfulness and encouragement.

Today, as a group fitness instructor myself, I’m still in awe of her. But now it’s because of her impressive professional skills of: (1) Speech. She literally talks through the entire workout, and always has something helpful or funny to say. (2) Knowledge. Joanie knows her stuff. And (3), Programming. I admire her VERY impressive ability to come up with all of those new workout programs for a daily show. Wonder woman!!!

What she’s doing now: Joanie lives in the San Francisco area and has hosted a health and fitness radio show there for many years. 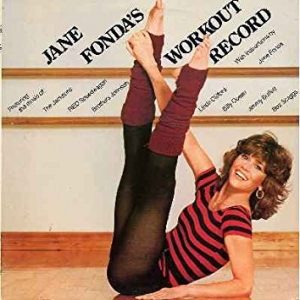 Jane Fonda was a trailblazer in the workout video world.

She is still a polarizing figure for many, due to her anti-war activities during the Vietnam War. But all of that was before my time, and as a teen in the 80s I was unaware. I knew she was an actress, but I really wasn’t all that familiar with her until the workout came out. So for me, I’ll always associate Jane with fitness more than anything else.

I had her album and workout book, which came out in 1981 before the video. I tried to exercise along to the album and book, but of course that wasn’t easy compared to doing a video.

Then in 1982, she released her first exercise video, Jane Fonda’s Workout, which became the best-selling video of the time. It would be the first of 22 workout videos released by her over the years.

What she’s doing now: Jane turns 80 in December, and remains active in her acting career and as a political and social activist.

Boy, watching this video really brings back some memories!

I had Richard’s “Never Say Diet” book, which came out in 1980 and heavily influenced me, and I used to love his daytime talk show in the early 80s. His show featured cooking segments, group exercise with the audience, celebrity guests, and personal transformation stories. A natural comedian, his energetic personality made every video, TV show and appearance something to look forward to.

Richard was really ahead of his time by embracing people of all shapes, colors and sizes. He featured overweight people in his exercise videos, starting with his first blockbuster “Sweating to the Oldies.” Diversity wasn’t exactly a “thing” in the 80s, especially in the fitness media world. But Richard helped change that, and with him all people were genuinely loved and accepted.

What he’s doing now: With no appearances since 2014, it seems Richard, 69, has retired from public life. In 2016 he closed Slimmons, the L.A. workout studio he founded in 1974 and where he continued to teach group classes until recent years. He still maintains a website and has a newsletter.

Not long ago, I found Richard’s “Never Say Diet Cookbook” in a thrift store and you know I grabbed it!

I first started doing Kathy Smith videos in the late 80s. By then, I was a very young Navy wife, alone in Connecticut while my husband was out at sea on a submarine for three-and-a-half months at a time. We didn’t have children yet. It was lonely and time dragged.

During one deployment, to pass the time and give myself something to focus on, I decided to exercise and try to lose weight while he was gone. That’s when I started doing Kathy Smith videos…and I did the hell out of them.

This did the trick, and I was so fit and slim when he came home! If only I’d kept up with that. I think the main reason I didn’t is because we lived in a small apartment and I was too self-conscious to exercise in front of him.

What she’s doing now: Kathy, 65, is still active in her fitness business creating workouts and products, and has a blog and podcast.

Always enthusiastic and still just as gorgeous as ever (and somehow, not aging at all!) is Denise Austin. I first became familiar with her in the late 80s to early 90s. In addition to creating many workout videos over the years, she also had a long-running exercise show on TV.

What she’s doing now: Denise, 60, is still very active in her fitness career, and continues to inspire and motivate.

Remember when step aerobics was the big thing? Yep, I had one, too.

Did you exercise with any fitness video stars in your younger years? Who inspired you when you first started exercising? Please share in the comments!

Subscribe to my newsletter to receive new posts by email! Go

GET A FREE E-BOOK!

Fill out to receive my NEW eBook, “6 Secrets to Winning at Exercise (Even if You’ve Always Failed!). You’ll get the EXACT strategies I used to drop the weight over age 40 after decades of failure!

GET A FREE E-BOOK!

Fill out to receive my eBook, "6 Secrets to Winning at Exercise (Even if You've Always Failed!). You'll get the EXACT strategies I used to drop the weight over age 40 after decades of failure!

For highly recommended products I’ve hand-picked to help you in your fitness journey, visit my Amazon shop