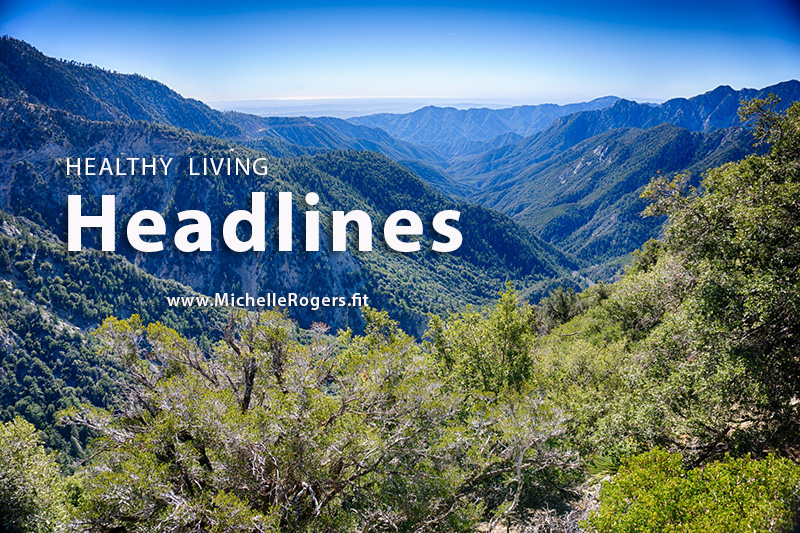 Healthy Living Headlines is a feature where I report on new research of interest.

Michael A. Tarrant, a professor at the University of Georgia’s Warnell School of Forestry and Natural Resources, reflects on parks and the importance of taking time to play:

“For too long, we have concentrated on growing economic prosperity at the cost of our happiness. However, the true sign of a progressive society is not one that is captivated by an ever-increasing GDP (which grows as a result of, amongst other things, higher incarceration rates and an unhealthy population) but focuses on fostering a spiritual wealth and Gross National Happiness that comes from a nation at play, not necessarily one at over-work. In this regards, national parks represent one of the greatest playgrounds on the planet.”

In celebration of the Centennial, the National Park Service is offering free admission to all 412 national parks from August 25 through August 28, 2016.

Exercising after work may prevent overeating

A study by researchers at the University of Alabama at Birmingham suggests exercise may be the key to curbing your appetite after a long day at the office.

In a paper published this month in the journal Medicine & Science in Sports & Exercise, researchers found that people who exercised after doing mental work ate fewer calories compared to those who did mental work and remained sedentary.

Severe obesity on its own may raise risk of heart failure

Severe obesity by itself leaves a person at significantly higher risk for heart failure, whether or not that person also suffers from high blood pressure, high cholesterol, or diabetes, a Johns Hopkins University study found.

The mortality rate for people with heart failure is 50 percent five years after diagnosis.

The study, recently published online in the Journal of the American Heart Association, found that morbidly obese individuals were more than two times more likely to have heart failure than comparable people with a healthy body mass index. (Futurity)

Welcome to my healthy living blog! My name is Michelle Rogers. I am a Certified Personal Trainer, a Certified Health Coach, a Certified Group Fitness Instructor, and a Senior Fitness Specialist. I … END_OF_DOCUMENT_TOKEN_TO_BE_REPLACED