You are here: Home / Diary / Tai chi helping me de-stress 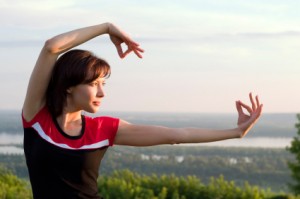 This week I am doing something new I’d been wanting to try, tai chi. A couple weeks ago at work, I happened upon a small group of ladies in a hallway doing it. Turns out they do this every day at 9 a.m. for about 15 minutes, and the leader, Tanya Richmond, invited me to join in.

Tai chi kind of looks like yoga, which I’ve tried once, but I did a quick bit of research on this and there are differences. According to livestrong.com:

…the two practices vary drastically. A tai chi session focuses on relaxed movements. The postures are constantly evolving and there are no pauses as the body moves from one posture to the next. On the other hand, yoga focuses on stillness. Each posture is held for several seconds or minutes, allowing the body to fill with positive energy between each movement. Both tai chi and yoga use controlled breathing and meditation to enhance the practice.

Mayoclinic.com describes tai chi as “an ancient Chinese tradition that, today, is practiced as a graceful form of exercise. It involves a series of movements performed in a slow, focused manner and accompanied by deep breathing…Often described as meditation in motion, tai chi promotes serenity through gentle, flowing movements.”

Basically, in tai chi, you relax to stretch; in yoga, you stretch to relax.

Tai chi is rooted in Chinese martial arts, but, Tanya pointed out that “…these moves have a non-violent approach to martial arts/self-defense application. I occasionally teach those as we move through the exercises.”

What I like about both tai chi and yoga is that these are exercises that focus on slowing you down — versus my daily workout routine that’s focused on speed, endurance, upping your heart rate, and loud music. And with tai chi and yoga, you’re not only slowing down, you’re quietly reflecting inward and really de-stressing.

For a while now, I’ve been bothered by the fact I’m arriving at work stressed out. My mornings at home are hectic — getting chores done, a full hour workout, getting showered and ready for work, getting my son out the door for school, facing a traffic-filled commute of left-lane dwellers. With everything I do in the morning, I’m typically running late or trying not to be, causing even more stress. By the time I arrive at work I’m harried. I think that a little tai chi in the morning may just do me some good!

I’m really appreciative of my colleague Tanya for taking the time to do this for us. This week there have been about seven of us in the carpeted hallway doing it. And yes, sometimes people walk by, go in and out of offices, use the elevators. As Tanya pointed out yesterday, it’s a good lesson that even though the world is buzzing around us, we can learn to be centered and peaceful inside.

Tanya leads us though a variety of gentle movements, stretches and positive affirmations, while oriental music plays softly from her iPhone.

Here’s a YouTube video of Infinite 9, demonstrated by Tanya’s instructor, Master Monty Hendrix of Essential Martial Arts in Greensboro, N.C. Picture ladies, dressed in casual business with our shoes off, in the hall, and you’ll get the idea. Hey, we make it work!


Let's stay in touch! Subscribe to receive my weekly newsletter of helpful articles, recipes and inspiration.

Welcome to my healthy living blog! My name is Michelle Rogers. I am a Certified Personal Trainer, a Certified Health Coach, a Certified Group Fitness Instructor, and a Senior Fitness Specialist. I … END_OF_DOCUMENT_TOKEN_TO_BE_REPLACED